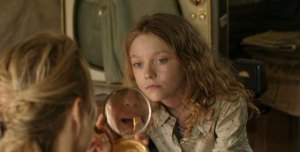 Hounddog, which became infamous after Sundance as the “Dakota Fanning rape movie,” has opened. Time Out NY calls it the aforementioned “rancid slice of Southern-fried crazy.” The film has elicited everything from boos to evangelical protests to the support of Gloria Steinem and various children’s and women’s advocacy groups. It is either exploitative or revelatory, depending on which review you read. Probably best to find out for yourself.