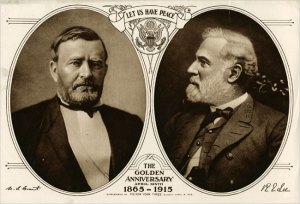 Robert E. Lee stands guard over Big D’s bedroom. There’s the small statue, which I made the mistake of messing with, on his dresser in his mama’s house. And then there’s the painting that greets you every morning when you awake. General Lee on his famous white horse hangs across from the bed on a wall adjoining a shrine touting acoutrements of D’s own meritorious past – medals, trophies, certificates and photos from his days as a high school football and wrestling star, a model Eagle Scout, his being voted “Mr. Blue Devil” and celebrating his appointment, just like Lee, to West Point.

It’s nice but I can’t say I really “get” the whole Civil War “thing,” especially the extent of what it means to a boy from Marietta, Georgia and why he becomes so intoxicatingly gleeful when showing me the place in the nearby Kennesaw Mountain National Battlefield Park where the most Yankees were killed!

Luckily, the New-York Historical Society is hosting a “Grant and Lee in War and Peace” exhibit thru March 29. I guess it’s not so simple as “we won the war, get over it.” The exhibit obviously deals with the Civil War, but also: “America’s tradition of citizen-soldiers volunteering to fight under professional officers but still thinking like democratic citizens. The exhibition will provide insights into the Army’s role in an expanding United States, whether reshaping the landscape, patrolling frontiers, conquering territory or suppressing conflicts with Native Americans.” The exhibit also “follows Grant and Lee back into civilian life, offers new scholarly assessments of the roles both men played after the Civil War. Visitors will leave the exhibition understanding why Lee was seen as the ‘knight on white horseback’ he became in Southern mythology, as the enduring symbol of a noble Lost Cause. A new and more realistic image of Grant will emerge: not simply the ineffective President surrounded by corruption, as he has been known, but a determined champion of Reconstruction and the rights of freedmen, and a far-sighted leader in seeking peace and justice for American Indians.”