Alabama’s Drive-By Truckers hit their home away from home – the 40 Watt in Athens , GA – this weekend for their legendary SOLD-OUT 3-night stand Thurs 1/15, Fri 1/16 and Sat 1/17. The only way in though is to win a package (dinner, the show and hotel for the night) via charitable auction on eBay. All proceeds benefit Nuci’s Space in Athens. Bidding for the show packages ends on Thurs 1/15 @ 10PM est.

The band is also hosting a pre-party on 1/17 at Nuci’s space with additional auctions, including the Wes Freed print pictured below, the stage backdrop from The Hold Steady/Drive-By Truckers 2008’s ROCK + ROLL MEANS WELL TOUR, and a bunch of other cool stuff. 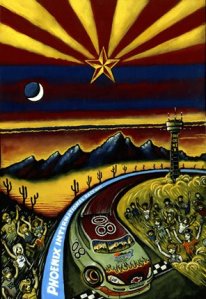 Nuci’s Space is a non-profit support/resource center for musicians in Athens, Georgia. It was founded in memory of 22-year old musician Nuci Phillips who took his own life in 1996 after battling major depression. The aim of the organization is to provide obstacle free treatment for musicians suffering from depression and other such disorders as well as to assist in the emotional, physical and professional well-being of musicians.