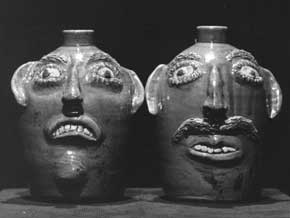 We barely made it the first time. The sun, which had been napping behind a blanket of soft gray clouds, peeked out just long enough to say goodnight. It’s 5PM and Brown’s Pottery in Hamilton closes at 5PM, but we were only about 20 miles away though and they tell us to “come on by.”

Jerry Brown is a 9th generation potter. He digs his own clay, mixes it with his mule and still uses the old glazes, casts and molds.

He has been honored as a “National Heritage Fellow,” has pieces in the Smithsonian and a letter from the 1st President Bush thanking him for maintaining traditional folk art in Alabama. His showroom is on a small, unlit, backcountry road, housed in a windowless trailer across from the mule’s red barn home. His pieces are both utilitarian and decorative – rooster teapots, birdhouses, plates, cups, rows of angels, and his famous face jugs. His workshop is attached and he demo his handiwork. His house, across the street. His property is idyllic – softly rolling hills, a pond, rows of stark white gourd bird houses. Jerry and his wife run this small family business and pass their craft down and along to the next generation in line, just as Jerry’s daddy did and his daddy before him.

In 2003 the city of Hamilton and the Hamilton Area Chamber of Commerce created The Jerry Brown Arts Festival: Reflections of the South. The Jerry Brown Arts Festival is (JBAF) is a juried art exhibition heading into its seventh season in 2009. The festival, which was selected as a Top 20 event for the month of March 2009 by the Southeast Tourism Association, is supported by the Northwest Alabama Arts Council, headquartered in Hamilton, AL, and is a yearly project of this 501 (c)(3) organization.