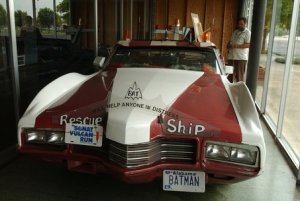 The council also pledged money to refurbish the car and to find a permanent place to display it.

Marquetta Renee Hill, daughter of the late Batman Willie J. Perry, said she was pleased. “That’s what I wanted.”

Until his death in 1985, Perry took the colorful car around the city helping stranded motorists. Then city bought the car and stored at the Southern Museum of Flight and later at Fair Park.

More recently it was stored in a city garage after crews took down the building that once housed the car to make way for a redeveloped Fair Park. The council last week had considered but then postponed a decision to resell the car back to the family for $10, in “consideration for his valuable and meaningful contributions.”

Councilman Roderick Royal questioned the city’s motive and asked for the week’s delay so he could talk with Perry’s family. Royal and Councilman Steven Hoyt both suggested the city preserve the car and put it on display once Fair Park reopens.

“If it is a part of our history as we say, then we owe it to the memory of this resident who just wanted to help,” Royal said last week.

Bham wiki recaps the life of this local hero:

Perry worked as a manager at window distributor J. F. Day. He lived by the motto “Do unto others as you would have them do unto you.” In addition to carrying gas, jumper cables and tools to help people whose cars had broken down, Perry gave free rides to people who had too much to drink, took elderly people to doctor’s appointments and drove kids around to McDonald’s or as entertainment for birthday parties.

When making his rounds, Perry wore a white helmet with the bat logo and a white jumpsuit with brown trim. He was featured in a 1982 episode of the television show That’s Incredible!.

Perry died of carbon monoxide poisoning when his garage door closed unnoticed while he was working on the Batmobile in 1985. He was survived by his wife, Dorothy, and daughter Renee Perry-Hill.

In 2005, Bham B& W City Paper’s Ed Reynolds wrote: Each night during the early 1980s, a pimped-out, maroon and white 1971 Ford Thunderbird with six antennas and fluorescent neon lights that illuminated over-sized tailfins cruised the streets of Birmingham. The contraption was customized to resemble the Batmobile, complete with the Caped Crusader’s bat-shaped logo. A sign on each door read: “Rescue Ship . . . Will Help Anyone In Distress.” Orange shag carpet covered the floorboards. The car’s gadgets were mostly household appliances…Perry spent evenings and weekends cruising streets and highways for stranded motorists in need of roadside assistance. Perry would also pick up drunks and whisk them straight home (or to other bars) without accepting so much as a dollar in compensation…Willie Perry once fulfilled the dying wish of a 100-year-old man by taking him on a Sunday afternoon drive in the Batmobile. The elderly could often count on Perry for a ride to a doctor’s appointment. His free excursions for kids at birthday parties or to McDonald’s were legendary. He always carried jumper cables and was sometimes spotted siphoning gasoline from his Batmobile into the empty tanks of stranded vehicles.

My good friend Bobbye Wade of Dora, AL concurs: “This guy was for real. He was all over the free ways, and downtown.”

Speaking of Birmingham, AL, be sure to check out the New York Times’ recent “36 Hours In…” guide to the city!