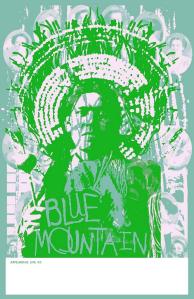 …Emerging from the post-punk Americana scene in the late eighties Blue Mountain came roarin’ up out of Oxford Mississippi with a sound that practically defined Alt-Country as a genre in American Music. Band members Cary Hudson (guitar), Laurie Stirratt (bass) and Frank Coutch (drums) create beautiful music that consumes listeners with all the passion and grace of the American South. Honest and straightforward, Blue Mountain’s scope of musical output has been critically linked to Neil Young and Crazy Horse, the Allman Brothers, Elvis, Tammy Wynette, Robert Johnson, and Alex Chilton among many others. Touring and recording for over a decade, the band called it quits in 2001 only to be re-born better than ever in 2007. (source)