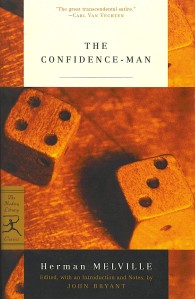 Playing thru 9/26: Herman Melville’s novel The Confidence Man is a colorful tale of a con man aboard a riverboat (on the Mississippi River en route to New Orleans) in the mid-19th century. The story follows the protagonist as he charms and then cheats his fellow passengers. As disarmingly relevant today as it was in the 19th century, The Confidence Man begs the question: in whom may we safely place our confidence?

The Woodshed Collective’s production of The Confidence Man will be composed of a series of interwoven and simultaneously performed vignettes, and will evoke the whirlwind of both a riverboat journey and the everyday urban chaos of New York City. The audience will choose what to see and which character’s story to follow just as one selects which newspaper stories to read, which YouTube videos to screen, or which online links to click. By allowing audience members to immerse themselves in the experience, the production seeks to blur the line between performer and patron, reclaim confidence in the power of live theater, and leave the lingering impression that the audience members themselves may not be immune to the confidence man’s charms or cons. (source)