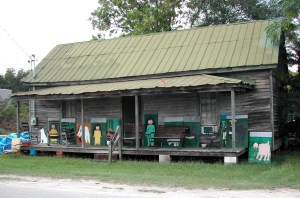 Jake (JT) McCord passed away September 1 at the age of 64. Funeral services were held at Zion Baptist Church near Lincolnton, Georgia. A native of Lincoln County, where he picked cotton as a child, McCord moved to Thomson as a young man and worked for the city for over 40 years.

Jake will be missed by many. He was a soft-spoken gental soul, despite his tragic and abusive childhood. Jake became famous for his paintings on plywood, which he would nail to the walls of his porch. He called this his gallery and said he put them on his porch, so the town children could come by and see his art.

His paintings were usually children playing with their pets, cats, dogs and animals from the farm. He had a unique vision using bold strokes and bright enamel paint. The McDuffe Museum will reconstruct the front porch of Jake’s home and display his art as he did for years.

One of his paintings of his home church rested against his casket, during his funeral service. Henry Drake, a longtime friend of Jake, said during the service “I was always glad to see J.T coming to see me. Sleep on my friend J.T. and save a seat for me.”