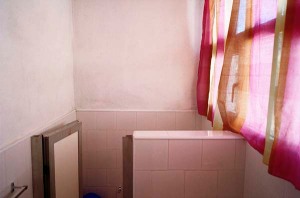 An exhibit of new Eggleston photos opens today @ the Cheim & Read gallery thru 2/13!

From the C&R site: William Eggleston, born in 1939 in Memphis, Tennessee, is widely credited with having elevated the medium of color photography to the status of serious art. In the 1960s and 70s color photography was most commonly associated with such middle-brow phenomena as commercial advertising and the family snapshot, and only the black and white photograph was
deemed acceptable for display in a museum or gallery setting.

Indeed, Eggleston’s first one-man show at the Museum of Modern Art, New York in 1976, organized by John Szarkowski, marks the moment in the history of photography when color
photographs were first admitted for exhibition to the ranks of a major museum.

Eggleston’s most recent photographs, exhibited at Cheim & Read, give themselves over almost entirely to problems of composition, color, and texture; and yet they do so – remarkably – only within the confines of what could have been seen by the casual observer, whose distracted glance would normally pass-over the surfaces of the world and retain virtually nothing of it.

For instance, Eggleston’s photograph of bags of ice in a frosted-over freezer (the sort one finds at a gas station or convenience store on the outskirts of town) initially reads as a study in the subtle gradations of color and texture in the freezer’s whitish blue-green interior, thickly coated in tiny ice crystals, which form horizontal ridges that run from edge to edge of the vertically-oriented picture. Only when we make-out the red lettering on the clear plastic bags of “party ice,” are we able to orient ourselves with respect to what the photograph is a photograph of: a freezer of ice.

Eggleston’s photographs of the American south, for which he is best known, are highly regarded for the candor with which they document the ordinary barrenness of the rural and suburban southern landscape. But it is a mistake to regard Eggleston’s project as essentially documentary in nature. The artist’s painstaking attention to formal concerns such as color saturation and
pictorial composition in the images he captures gives his photographs a particular strikingness that stuns the viewer, compelling him or her to fixate his or her concentrated attention on the photographic image. Eggleston himself has explained his approach to photography as follows: “Essentially what I was doing was applying intelligent painting theory to color photography.” Perhaps we do best to understand Eggleston’s photographic practice in terms of the artist’s visual acuity, his gift for being able first to discern, then to isolate, those exceedingly rare moments when the banal materials of the everyday world are aligned just so to make that perfect, momentary image which transcends its own fleetingness through its coincidental engagement with artistic convention.