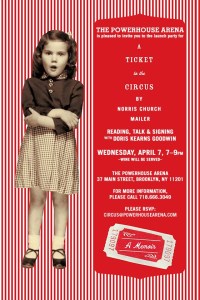 Mailer was born in a tiny Arkansas town and became a model, an actress, a painter, and writer. In the 1970s she dated a little-known, aspiring politician named Bill Clinton, then went on to marry Norman Mailer (and stayed married to him, for over 30 years). She faced down ex-wives and lovers by the dozen; she became mother, stepmother, and grandmother to an ever-growing brood.

From age three when she was crowned Little Miss Little Rock, Norris Church Mailer has gone from one wild adventure to the next, and she shares it all in her beautifully written, delving memoir A Ticket to the Circus. Reading her stories is like sitting down with an old friend: Norris holds nothing back, from showing up to dinner with Oscar de la Renta wearing only a nightgown, to serving coleslaw to Bob Dylan; from the heartbreak of first discovering her husband’s affairs, to saying goodbye to Norman on his deathbed.

In a winning narrative voice that evokes her native Arkansas, Norris recounts her days as a bright, talented girl who knew her life would one day be full of adventure. With clear eyes and startling frankness, she depicts the full evolution of her marriage to Norman Mailer, from the white-hot beginning through the very rocky patches to the mournful end, offering an incredibly intimate perspective on this legendary man of letters. A Ticket to the Circus is an intelligent, bittersweet book that will enchant readers with its charm and insight into how we grow up and how we love. (source)