Set in the 1930s in a rural Southern town, the film follows scruffy hermit Felix Bush (played impeccably by Robert Duvall), who has lived alone on the outskirts of town for 40 years shrouded in a dark mystery. One day he emerges from isolation to plan his own living “funeral party,” expecting the townsfolk who have rejected him for years to attend. Denied a proper funeral for his checkered past, Felix perseveres to set the record straight. With the help of Frank Quinn (Bill Murray), the town’s broke funeral director, his quirky assistant Buddy Robinson (Lucas Black), and an old friend and widow Maddie Darrow (Sissy Spacek), he tries to retrace history and expunge his record. (source) 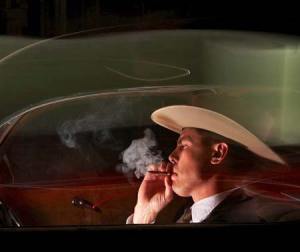 Casey Affleck is Lou Ford, a small-town deputy sheriff ordered to evict local prostitute Joyce Lakeland (Jessica Alba) for taking up with the son of a prominent businessman. It only takes one encounter with the seductive Joyce for Ford to get swept up in an intense sexual affair with her, and soon he’s hatching a scheme to blackmail her lover so they can run away together. But behind Ford’s accommodating Texan smile hides a cold-blooded killer, and when his upstanding fiancée (Kate Hudson) catches wind of the infidelity and the whole town begins asking questions, Ford’s attempts to cover his tracks snowball in escalating acts of deception and violence. (source)