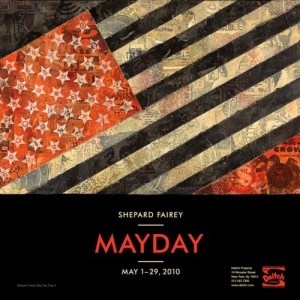 From the Los Angeles Times: Jeffrey Deitch is planning to close his New York gallery with a bang. The art dealer, who was recently named the new director of Los Angeles’ Museum of Contemporary Art, said that his final exhibition will be a solo show of work by street artist (and political lightening rod) Shepard Fairey.

Speaking on the phone from New York, Deitch said the exhibition will feature “probably more than 20 works” by Fairey. The show is set to open May 1 and will run through the month at Deitch Projects‘ SoHo location on Wooster Street.

Deitch said the theme of the exhibition is Fairey’s “vision of America” and will include portraits of some of Fairey’s “American heroes.” He said that the artist has been working on the project for about a year.

A spokesman for Fairey at the artist’s L.A. studio said portraits in the show will primarily depict people from the fields of music, culture and art — including Debbie Harry and Woodie Guthrie. In addition, the show will feature portraits of the Dalai Lama and political activist Aung San Suu Kyi.

Fairey is also planning on creating site-specific outdoor murals as part of the exhibition. His studio said that there will be several of these large-scale murals and that “we try to do as much outdoor as indoor work.”

As part of his new job at MOCA, Deitch will cease his gallery operations to avoid conflicts of interest. Deitch started representing Fairey last summer.

Deitch Projects is pleased to present May Day, an exhibition of new work by Shepard Fairey, as its final project. Titled not only in reference to the day of the exhibition’s opening, the multiple meanings of May Day resonate throughout the artist’s new body of work. Originally a celebration of spring and the rebirth it represents, May Day is also observed in many countries as International Worker’s Day or Labor Day, a day of political demonstrations and celebrations coordinated by unions and socialist groups. “Mayday” is also the distress signal used by pilots, police and firefighters in times of emergency.