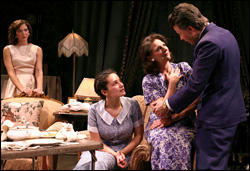 ANOTHER PART OF THE FOREST

The shocking, rarely-seen “prequel” to The Little Foxes, Another Part of the Forest depicts the early days of the notorious Hubbard family. There’s the father, Marcus, the most-hated man in town; his emotionally crippled wife, Lavinia, who has secrets of her own; their wayward daughter, Regina, and two resentful sons. The eldest son, Benjamin, uncovers a long-buried secret. Threatening to reveal it, he attempts to blackmail his father into signing over the family fortune or face an angry lynch mob. (source)