R.C. Hagans is an Auburn-based multidisciplinary visual artist, an MMA fighter and the son of a minister. He’s currently enjoying one of the most prolific times in his career as an artist having decided to treat making work as his full-time job. With a little over a week to go before the opening of a new show, he granted me a peek behind the curtain and we sat down to discuss how all the disparate elements of his life are actually interconnected and inform one another.

His show, “Present, Future, Past,” opens Friday night (11/15) at the Overall Company in Opelika as part of an AU/GA Pre-Game Weekend Bash. OC writes:

Think of time as a circle.

This work is primarily taken from classical Hellenistic sculpture; timeless beautiful images of poets, gods, demigods, and warriors now more symbol than portrait. The images are drawn and then hand cut into paper stencils, or painted in oil, aerosol, acrylic, and latex paint. This approach confronts the viewer with an image that is both ancient and urban. A modern take on mythology.

Below are photos from my visit to his studio, which he is currently in the midst of moving from the basement of his parents house to a new space in downtown Opelika, Ala. Quotes or audio clips from my own interview will be up soon. 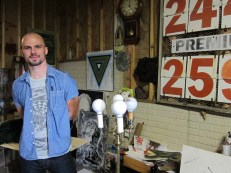 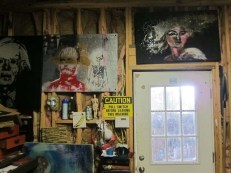 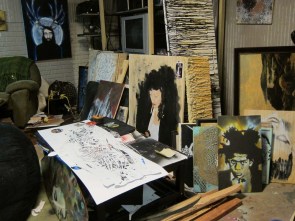 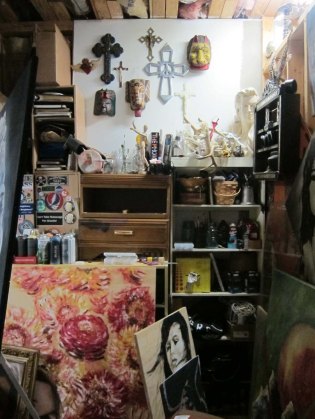 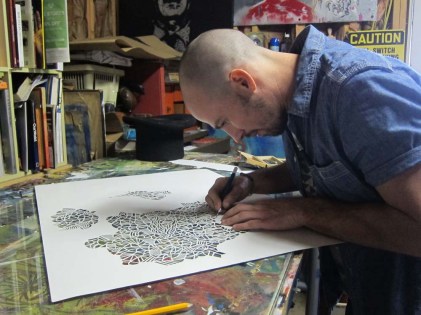