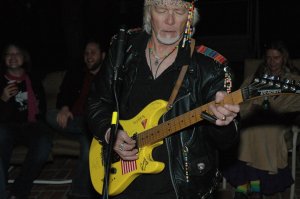 Johnny Wyker had been in the studio for three days, and it was time to take it home and lay it down. He wasn’t in any shape to drive, but there wasn’t any other way to get home. It was almost 4 a.m., and there hadn’t been anyone in town for hours.

Wyker had been the driving force behind Sailcat and its 1972 hit Motorcycle Mama. He was a well known member of the Muscle Shoals music community, and it wasn’t unusual for him to become totally lost in a project during its creation.

Since he was having difficulty driving, he put the driver side wheels of his Cadillac against the curb and slowly drove up Montgomery Avenue on the wrong side of the road, toward his garage apartment on St. Louis Avenue.

He had only gone about three or four blocks when the patrol car pulled up. The policemen recognized Wyker, and asked what he was doing. Badly slurring his words, Wyker explained he had been working in the studio for three days straight and was just trying to make it to his apartment.

So the policemen put Wyker in the patrol car, and one of them drove the Cadillac to Wyker’s apartment, while the other policeman followed in the patrol car. They let him out and told him to go upstairs and go to bed.

Wyker thanked them and headed up the stairs. A short time later, he realized he was out of cigarettes. So he went downstairs, got into his car and begins driving to the store. As he arrives at the store he runs into the two policemen again. They let him buy his cigarettes, and then once again one drives the Cadillac while the other gives him a ride home.

They tell him not to go out again, and let him go upstairs.

A few minutes later there is a knock on the door, and it’s Jimmy Allen who is drunk and has grounded his car in the median a block away. He asks Johnny to come help him get his car free.

So Wyker walks with him back to the car, and gets behind the wheel to steer while Jimmy pushes it off the median. In the middle of this the policemen drive up and discover Wyker in the driver’s seat revving the engine while Jimmy is trying to push the car off the median.

They were both arrested, and I was called the next morning to come bail them out.

As I opened the door to the City Hall I heard voices coming from the jail upstairs. As I climbed the stairs I couldn’t believe what I was hearing. Wyker had all the inmates and the jailer singing “I’ve Been Working on the Railroad.”

They finish the song and all give themselves a big cheer. When they let Wyker out he’s got this big ass grin on his face, and as we are leaving the jail, he gives me the best advice I’ve ever gotten. He told me, “Always make friends with the arresting officer.”

The story happened in 1973, and this picture of Wyker is 2004/5. Photographer, journalist, manager, road manager, promoter, music publisher, producer, curator, Dick Cooper has done everything but perform during his 33 years in the music business in Muscle Shoals, AL. He recently wrote about the passing of his friend Jerry Wexler on Swampland.