The Melting Point in Athens will host a release concert for Art of Field Recording Volume II, a box set compilation on Dust-to-Digital of Art Rosenbaum’s field recordings of American traditional music over 50 years. Volume I, released in 2007, has garnered two Grammy nominations, was called “blindingly beautiful” by the New York Times, and was the subject of a New Yorker article by Burkhard Bilger. For more info visit Dust To Digital. 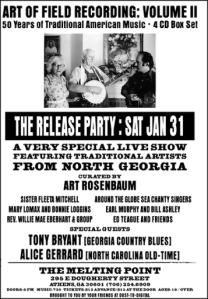 While in Athens, be sure to grab something at Garden & Gun fave 5&10 restaurant. The mag raves: Embracing a dress code “from Speedo to tuxedo,” the 5 & 10 injects down-home modern into Southern classics. Named for a five-and-dime that once stood on the same lot, the 5 & 10’s menu shifts daily, with a few stalwarts, such as Frogmore stew—a tasty spawn of a Lowcountry boil and bouillabaisse—always available. “When we opened, we wanted to be a community restaurant that cared about good bread and good wine and good food,” says chef/owner Hugh Acheson. “I come from a fine-dining background. I was running away from that as fast as I could.”
Luckily, Acheson didn’t get too far. Try the roasted asparagus covered with a poached local egg and warm bacon vinaigrette, followed by the “bronzed” redfish fillet in lemon emulsion. Such dishes earned Acheson Food & Wine’s 2002 Best New Chef award and, more recently, a 2008 James Beard nomination for Best Chef Southeast. There’s a fine, rangy wine list, too. (706-546-7300)