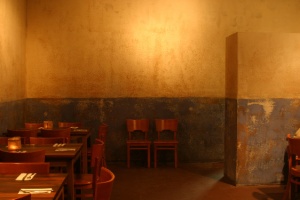 Two new Texas themed restaurants have hit NYC. Marfa (pictured above) is, according to Thrillist, “the brainchild of an E.Vil townie who convinced the Lucky Cheng’s crew to replace Waikikki Wally’s with a scuffed-wall, cellar-esque barstraunt named for a West Texas artist colony…Texas grub includes fried catfish w/ cole slaw and beans, dry rub BBQ, mac & cheese, and their own Marfa Chili, so meaty, other chilis will jealously whine ‘Marfa Marfa Marfa.'”

And in Brooklyn, Whiskey Sunday, of which the Village Voice wrote: “‘A new barbecue spot in the land of rotis,’ and that pretty much sums it up. Prospect-Lefferts Gardens is a paradise of West Indian and Caribbean food, and that’s where prolific Brooklyn restaurateur Jim Mamary has recently opened a non-traditional but tasty barbecue spot. It was called Billy Sunday’s, in a tongue-in-cheek ode to a famous prohibitionist, but apparently Billy was known for not only hating booze and being an evangelist, but also for being a rabid racist, soooo… that name was soon nixed in favor of Whiskey Sunday.”